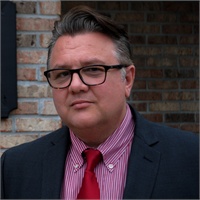 Eric is originally from Grand Rapids, Michigan. His father, Robert ‘Bob’ Olson brought the family with him to Philadelphia in the early 70’s while training to be a General Agent with Penn Mutual Life Insurance Company. In 1974, Bob moved the family down to Jacksonville, FL where he became General Manager of the local Penn Mutual insurance office.

As a child, Eric would spend time organizing the office supplies at the agency. When his father moved on to be one of the first to work in the fledgling 401(k) industry in the early eighties, Eric was exposed to the industry in its infancy when he would visit his dad in the office.

Eric became president of his senior class at Sandalwood high school and attended the University of North Florida.

Since 1997, Eric has worked extensively with the vast menu of products and services related to retirement planning. As an Investment Adviser Representative, Eric’s experience and knowledge ranges from 401(k) Plans, SIMPLE IRAs, IRAs, annuities, life insurance, mutual funds, fee-based wealth management and beyond. Eric has a passion for individual retirement income planning and non-qualified retirement planning for small business owners.

“I can rightly say that I literally grew up in this industry. I remember in the 1980’s seeing annual 401(k) statements being printed out on a dot-matrix printer. You know the paper with all the little holes on the sides? The paper was all connected so they would feed through the machine, and was perforated so it could be easily torn before mailing. That was back when the Third Party Administrators printed them out and mailed them to employees once a year. Times have definitely changed.”